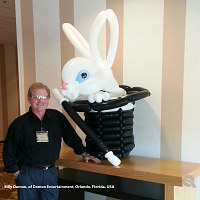 He started his balloon career just clowning around, literally! Billy Damon, of Damon Entertainment, Orlando, Florida, USA, was just 15-years-old when he began working as a clown and sculpting balloons as part of his performance. Today, Billy is much sought-after in his role as a full time, multi-faceted artist who performs worldwide. His repertoire includes balloon artistry, magic, stilt walking, face painting, fire eating, and juggling.

At first, Billy honed his balloon craft primarily by watching and imitating others. Now, he finds a lot of inspiration as a participant in conventions or locally hosted Jam Rooms. Continuing to expose yourself to new ideas and trends is critical, according to Billy. 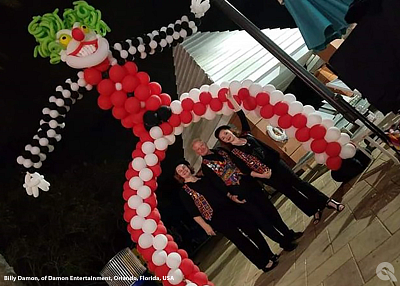 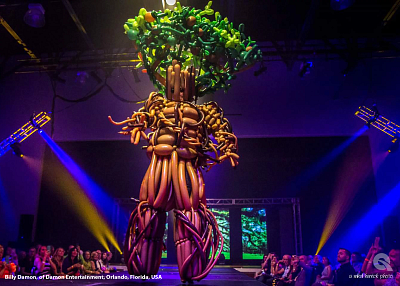 “Conventions keep you current and teach you different things. If not for going to conventions with Eve, and Silvia, and Edward, I would never have known how to make the delivery and decor pieces I am making now! I was also lucky enough to work with Gerry Giovinco (Captain Visual In Atlantic City.) Wow! That experience opened my eyes to a whole new way of looking at balloons!” Billy has also competed at several events to push himself and won awards for his balloon sculptures, magic demonstrations, and clown characters. He considers himself fortunate to teach and entertain at various regional conventions and the World Balloon Convention.

Over the years, Billy has learned that building relationships are the key to success, noting, “I want clients, not customers.” He also invests in a corporate website and maintains a strong social media presence.  Ultimately, the majority of his work is from repeat customers, referrals, and word of mouth. The backbone of this good fortune is a strong, standout performance.

“Costumes are very important! It identifies you as a performer. They help build your brand. It tells your audience, ‘watch me-- I’m going to do something cool!’ I get my costumes from all over the world too. I’ve had costumes made by the same people that make costumes for Radio City Music Hall and by costume makers for Casino Shows. I always have my eyes open for new costume ideas!”

Though he doesn’t have a self-prescribed signature style, Billy does note, “whenever I make something, it has to be recognizable from across the room. I want the next table or the next guest to know what they want when I arrive. It keeps them interested and things moving so I can make the most of my time and greet as many as possible.” His favorite creation is “the one he hasn’t made yet!”

His career as an entertainer and balloon artist is a family affair, with his wife and children active in the business. Billy says he is fortunate to have a profession and income doing what he loves. For him, the balloon profession's most appealing part is "the entertainment value, creating smiles, and the sense of wonder." What advice does he have for young or novice artists? "Do the best you can, all the time. Work for the shows you want, not the ones you have!"

“I try to create a ‘moment.’ The client may forget the balloon I made or the trick I did, but they will always remember the way I made them feel.”