Join the "Adopt a Grandparent" Movement

Balloon artists are some of the most generous people you’ll ever know! Here’s what many have been up to lately. It’s called "Adopt A Grandparent." Since its inception last year in the United States, the campaign has gone international. The goal is to bring cheer to older, isolated citizens.

People or companies can sponsor a senior citizen by purchasing a discounted arrangement from a participating area artist. It works this way—the participating artist partners with an assisted living center or nursing home interested in receiving the gifts. Depending on the number of residents, a fundraising drive is held until enough money is raised to give each individual a balloon gift. Then, begin again! Though not a huge moneymaker, it does provide incremental income to artisans and brings a bit of joy and happiness to the community.

Steve Jones from Balloon Designers in Seattle, Washington, launched a similar campaign early last year called Balloon Buddies. “The concept behind this program began in April 2020 during the COVID-19 pandemic as an extension of the One Million Bubbles Project. We decided in between efforts for One Million Bubbles to create a campaign to raise awareness and funds for a gift campaign to local seniors. We called it 'Be a Buddy, Seattle,' naming the program after our balloon 'buddies' that we frequently used as promotional pieces as well as small retail gifts. Unlike the OMB project, which brought joy on a large scale, the 'Be a Buddy' program was intended to bring joy to one special person at a time.

Liz Romani from Valley Party Supply in Vincennes, Indiana, initiated the campaign as we know it today.

This campaign sort of materialized out of the need to fill an incredible void and do something positive in a time where everything was going on in the news and the media was disheartening. This became an initiative to bring hope, joy, happiness, and love to the oldest residents in our communities who have felt the biggest impact from isolation during COVID. But it quickly became something more…it became a beacon of light and positivity in our industry in a time when we felt lost and hopeless. It inspired people to DO something about it…it became a campaign that literally became a win-win-win for everyone involved. The impact it made was more than I could have ever anticipated.

For artisan Sara Meyer, CBA, from Wisconsin Balloon Decor, the campaign has been a win-win.

Professionally, I grew a lot! In order to process this many orders, I became a streamlining and automation pro. My website and CRM have never been more organized. I've also introduced hundreds of new clients to my business and our industry, all of whom have birthdays and celebrations for which they need balloons! I was on the news and the radio and in the paper, and all of that press was positive and heartwarming. The good vibes are just off the charts right now…it reaffirmed that most people are good. I had 575 adoptions just in my county. Strangers, spending money to make other strangers happy. And the fact that balloons were the tool that created these connections and emotions is really important for our industry's longevity. It reminded people how good it feels to send and receive a colorful, happy balloon delivery. 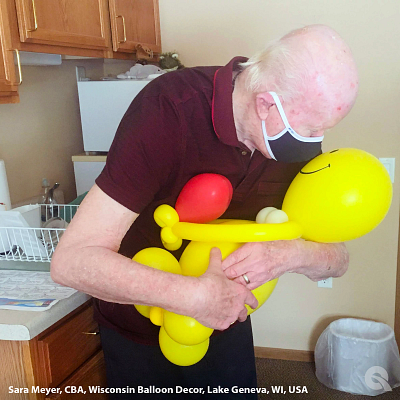 Francine Kades, CBA, from The Balloon People in Arizona, summed up the program and its results best.

If you have a loved one, you will know how alone they are. My 87-year-old mother lives alone in South Africa and has spent most of the last year pretty much alone. She is very active and was still working before Covid... this has been very depressing and lonely for her, and I think it is going to take a toll on her mentally as well. Seniors especially have been alone…Anyway, this was designed as something to cheer them up… It is a definite feel-good program for us. When we hear how happy the recipients are to receive a buddy, it makes my day! 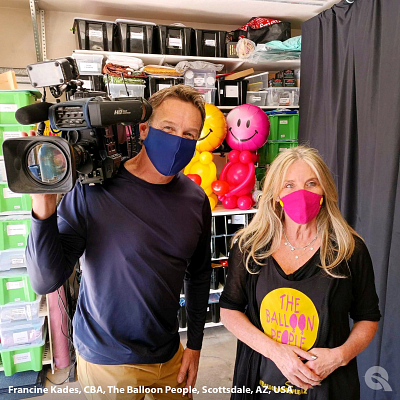 Check out some of our favorite #adoptagrandparent posts on Instagram below. Be sure to scroll through the pictures in each post!

A post shared by Just Baskits and Balloon Decor (@justbaskitsandballoondecor)